One thing about waking up early in Hawaii is the sunrises. The reason why I can roll out of bed so early for Hanauma Bay. Waking up before 7am to arrive at this very popular touristy spot is almost a must if you want to avoid the crowds and the tour buses/groups. Arrive well before 9:30 am or right as the park opens at 6:30am. So here I am awake and ready to go snorkeling!

I rented my gear from an off site vender (Bellows AFS $10.00 for the whole set), other than that, you either bring your own or rent from the site itself. The parking was so cheap! A dollar cheap! But what really dings you, the admission price of $7.50 for an adult.  I can understand why change a price for entrance, the park is a conservation site.  After we all paid we all waited with other people for the video they show every one who enters the park outlining what the whole coral reef is and what you cannot do while snorkeling, swimming or scuba diving in the reef. The worst part of the video, knowing people are going to do it anyway because as Nana pointed out, people who do not have a grasp of the English language and watching the demonstrations of what NOT to do, will not understand. Believe me, I saw it happening!

After a walk down the steep hill to the beach, we staked out a claim under a shady coconut tree to put our stuff. At this time there was not may people down on the beach, so I decided I need to get in the water and start snorkeling before it’s too late. I went out with both parents around a section of the coral reef. I am amazed at how you can just enter the water, lay on your belly, put your head in the water and see underwater! Now you can probably guess, this was my first time snorkeling. I saw huge fish swimming past me, huge coral, some creature stuck to the coral looking like a human brain, lots of species of coral, and yes you guessed it, sea turtles. On my first try my mask kept fogging up to the point I had to un-fog  it multiple times with my own spit. Then I was having  a hard time breathing through my snorkel tube since water kept going in, and swimming with the flippers was a challenge. Eventually I figured out how to snorkel. I would do this again next time somewhere else in the Hawaiian Islands. Around 11:00am we decided it was time to go and have some lunch. At this point the beach and water had become very crowed. We all forked over $1.25 to ride the trolley back up the steep hill. At this point I was tired and did not want to pack all my stuff back up the hill.

We had lunch at the park’s picnic area that overlooked the beach and water. As soon as the food was unpacked, all the park’s feral chickens made a B-line toward us. As you see, no shame for a chicken. After a picnic lunch, we parked up and left to drive along winding coast highway back to Bellows AFS. Along the way we stopped at the Makapuu Point Lookout. Oh my goodness this is a postcard perfect look out! The lookout towards the windward coast line, and the tropical blue water. This is a breath-taking view to see. There is a lighthouse by the same name on the side of the cliff. I would love to come back and hike up to see the place (every night at Bellows, I could see it off in the distance). The rest of the afternoon was spent getting ready for our dinner date with my cousin.

My cousin is stationed on Oahu at the Marine Corps Base Hawaii at Kaneohe Bay. Earlier that week my cousin’s “gunny” gave him permission to give us a tour of the place where he works  (a rare thing in this day an age). The whole family had the opportunity to meet his team, and see what his everyday job on base in logistics. Seeing him in action was very cool. It is amazing the last time I saw him was eight years ago when he was just a little skinny kid his older brother use to beat up, and now he is all grown up in a military uniform. I feel old just typing that! Also seeing more of the base then just the MCX (post exchange) and the Commissary. I will have to say, it is hard to pick out some of the guys when all of them are in uniform because they all look the same. Also like most active base, the base had the semi-desert feel to it.

Buzze’s Steakhouse in Lanikia . This place is where Nana, and my cousin had gone to the last time Nana was there for vacation. The place has a beach theme to it, with seating inside and outside. The menu is very limited to steaks, seafood and salad.  At first I could not find anything appealing except Teriyaki Chicken with rice. All meals come with the salad and fruit bar option. The favorite item at the salad bar was the mint cucumbers. My cousin raved about trying them and I have to say, they are pretty darn good! For desert my cousin and I split an Almond Joy cheese cake. OMGoodness! It tasted just like an Almond Joy bar! I would give the place an eight out of ten because even with the cool atmosphere, I think there needed to be a little more options on the menu for the steaks and seafood (I think this time the menu did not have any seafood on it).

The next day we all just relaxed and stayed on the beach and surrounding areas of Bellows. One major event was mini golf or as I call it put-put-golf on the Bellows mini golf course. For an hour all of us played a fourteen hole mini golf. Now I would like to say the game became competitive and there was throwing golf clubs around, but my family is pretty tame when it comes to these kinds of things (except Pit, oh boy this game gets very competitive!). For $6.00 for a mid morning game of golf (how do people find golf relaxing? I find it stressful) we went around the course hitting brightly painted golf balls through, under and even over obstacles that represents each of the Hawaiian Islands. Oh dear….I’m bad at golf and not much better at mini golf either. There was no score being kept, but Nana had all of us beat. Overall I had quit a good time laughing at myself trying to hit the ball into the hole. I know I will never be playing golf in the near future, and hope who ever I end up marrying will understand I should not be allowed on the “green” at all. I’m dangerous with a golf ball apparently.

After lunch Mom, Nana and I took a little trip up to Nu’uanu Pali Lookput in the Ko’olau Mountain range over tunnels of the Pali Highway. The lookout has a panoramic view of the Windward Coast, the Marine Base, Nu’uanu valley, and the spectacular view of the tropical blue water. 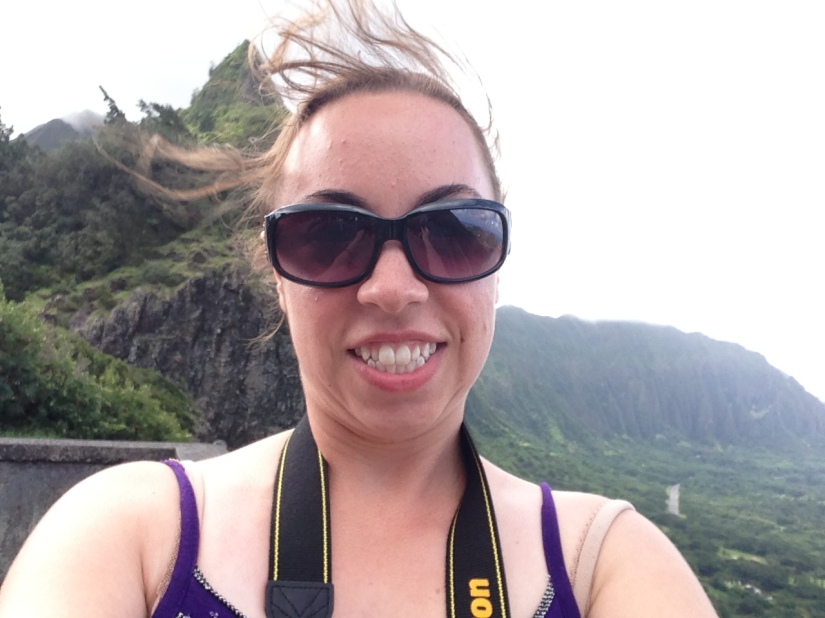 As you can see from the pictures, it is very windy up there with strong trade winds. At one point when taking a picture of where the old Pali highway use to be, there was a huge wind tunnel effect.

After the little trip to Pali Lookout, I needed to have a few things washed at the laundry. Right by the small Post Exchange store is an outdoor laundry room. All I have to say is, the washer and dryers here work a whole lot better than the piece of crap of a stacker laundry machine I have in my apartment! While there sipping on my soda, an Airman (Air Force guy) drove up and bought a six-pack of beer at the Exchange. Then thirty minutes later, he was back for a pack of cigs. Then an hour later back again for another twelve pack of beer and two cartons of cigs. It must have been one of those hard duty shifts at the guard gate to need to buy 18 cans of beer and three packs of cigs! Then again, there are days where I need three cans of coke-a-cola to get through the day. After fresh laundry folded, I headed back to the cabin to relax from all the snorkeling I did the day before.