I have already done this hike before, but this time it seemed there was something different this time around. It might have been due to hiking in a small group of students at Northwest U, or I just knew the outcome of this hike. Either way, it was a better view this time. Last time I went it was in the middle of summer (the hottest on record), the lake was almost non-existent, and there were people doing stupid stuff up on the ledge. This time, there was none of this!

The hike started out around 10am in the morning, and ended around 1:30pm. It took us two hours total to go up and down the trail; and hanging out on the ledge taking Instagram worthy pictures (most of the others are out-of-state people who never been, and so worth being a part of this for them).

Then a few minutes hanging by the lake to cool off before heading back home.

What to do when you don’t have a reason to be at Sea Fair? Beat the Interstate 90 bridge closure and go hike Rattlesnake Ledge trail with a friend. Early on Saturday morning a friend and I went on an adventure up Rattlesnake Ledge on a hot summer day (90 degrees!) to experience the view everyone talks about.

Boy was we in for a great view, just look at this view!

We started our adventure with a forty-five-minute drive from Seattle towards the outskirts of North Bend. After a few minutes going around in circles in the small town of Tanner looking for the road leading up to the trail with a GPS that was having dumb movement, we finally got to the parking lot of the trailhead around 9am.

Since the whole state is in a state of drought, there was a section of the lake bed that had dried up and you could trek across the lake bed to the head of the trail without going all around the lake. Starting up the trail at 9am is a good time because there was not a lot of people going up or down at this time. There were a lot of pauses along the trail for some water after the heat of the day started to come through the canopy of trees. The trail going up had switchbacks, steep inclines in areas, rocky and tree roots on the trail. There were times when my friend had to help me up with the steps made out of tree roots. Overall I made it up the trail without any incident.

I reached the ledge after an hour of hiking two miles up the trail. The view did not disappoint at all, and the sun made the perfect reason to bask on the rocks looking out over the valley below. The lake below was a beautiful bluish- green color with the banks very visible from the ledge showing how dry the summer has been. From the ledge, you could see Mt Si, North Bend, Tanner/Riverbend, Chester Morse Lake, Christmas Lake and Iron Horse State Park Trail. 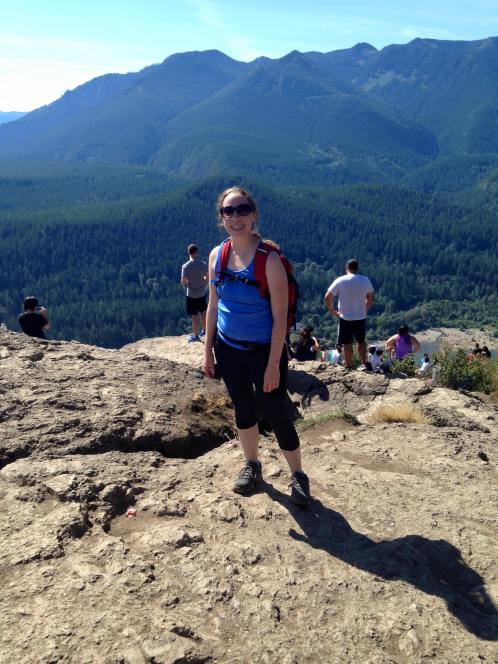 After spending an hour on the ledge people watching and resting for the trip back down, I started to see groups of people starting to get crowded the ledge. We decided to start back down the trail after a few people started to push others out-of-the-way on the ledge. While coming down there were a lot of people starting up the trail to the ledge and a few people who were struggling with the heat as they hiked upward. I am so glad the both of us decided to go earlier because marching up the trail with people crowding behind you would not be a fun experience and the weather was getting warmer the longer I was on the trail. When we drove out of the area there were a lot of cars parked on the shoulder of the road and lots of people on or by Rattlesnake Lake.

After finishing the hike we stopped in North Bend to refuel ourselves and then head back home to cool off from the Ninety-degree weather.  Now I can check this one hike off my bucket list and try next time to hike up to Upper Ledge which is another 3.8 miles past the lower ledge.