My first morning in Tanzania started with waking up to a dog fight outside the hotel window at five in the morning. I would soon find out this would be a common morning occurrence for the duration of my stay. The morning started off with me looking out the window at the street and seeing people walking along the street on their morning routine. School children in their uniforms walking to school, adults on their way to work, and stores opening up for the daily business giving this traveler a glimpse into the daily life of Arusha.

This pink building hides the reality of poverty intermingling near fancy hotels in this part of town. A reminder of why I am here with Northwest University and meeting with Convoy of Hope on the same day. Breakfast was at the hotel’s restaurant most days which consists of fried potatoes, Tanzanian pilau rice, Kenyan sausages, banana pancakes, East African donuts called magwinya, fresh fruit and coffee made from beans in the Kilimanjaro region coffee plantations. After finishing, I grabbed a 1.5L bottle water and headed to the conference room to meet the team from Convoy of Hope.

Eating our first breakfast in Tanzania (I’m in the purple). Credit: Ingrid Navarro

The day’s agenda was to hit the ground running with Convoy of Hope and start working with them on some of their projects they are doing in the local communities around the area.

The main focus for Convoy of Hope in Tanzania is sustainability for communities around the area. The work done by this team was mostly done in agricultural/ small garden training, women’s empowerment, child feeding programs for nutrition, clean water, and crises relief. I did not realize how small the organization Convoy of Hope is compared to other humanitarian organizations like Samaritan’s Purse. Convoy of Hope concentrate its focus on a few areas and this makes them effective in their work. Even without medical component to their work, I can see great things they do for the health of those in the Arusha area and all of Africa. We all asked questions to get a better idea of the problems faced in the work being done, and learning what would be an effective way of asking questions to help better understand the needs of the community to better help them with issues being faced. After two hours of discussion we were all invited to have some tea (a custom holdover from the colonial days when a British colony). The tea is nothing like any I have ever tasted before! Marsala tea is a new type of tea to me, and it packs a powerful punch too without the caffeine! It has a spicy ginger taste that hits the back of the throat from the cardamom and cinnamon mixed with the black tea leaves. I ended up finding some at a local supermarket to take back with me and later found some at a local Indian grocery store back home.

We all mingled around the demonstration gardens looking at all the cool ways of using planters to grow crops in. Found a banana tree with bananas growing on it, and meeting some of the women who are a part of the women’s empowerment program in a gathering.

Lunch was at a local restaurant off the main road called Milestone Club in Arusha. The restaurant is one of few places we are able to eat at without getting sick and the manager is good friends with Convoy of Hope. The atmosphere was open to the elements, with a thatch roof overhead, and an interesting playlist of music ( on this day it was Celine Dion’s greatest hits playing). Here I tried Tanzania’s national dish ugali which is a cornmeal porridge served with grilled meat which was whole chicken (biriyani and mchicha) for me. Others had the beef, fish, beans as the main dish with their ugali. The fish one even had eyes still in the socket and a few daring people actually ate them whole which made for a disgusting sight to witness! BBQ goat was passed down the table for all of us to try. The BBQ goat had a cross between the taste of lamb and the texture of steak when you eat it. The goat tasted better than I expected, and I am surely going to try it again in the future.

Pork is not seen much around Arusha, and the local butcher at any of the markets did not have pork product for sale. I wonder why? Is it an unclean animal in Tanzanian culture? Since water has been from the bottle source, I decided to try a new drink, Stoney’s. Stoney’s is a ginger beer drink produced by Coke Cola and is non-alcoholic. The ginger-ness is much more powerful than the ginger beers we have in the Seattle area. Sadly the drink is not sold in the US market.

After lunch, we all were split into groups to interact with the locals at the marketplace in Mianzini area of Arusha. The first encounter was a woman who just started her little shop in the middle of her neighborhood to sell staples of food items and necessities. She was very happy about how Convoy of Hope helped her start her shop and now she can afford to send her children to school by the income she generates through this little shop. I bought from her some chocolate cookies she had, and I pray her store will prosper into a sustainable business. The second encounter was a woman who has a shop along the main streets of the area who sold a variety of items. Her hard work, dedication to raising her son, never-ending faith in God’s provision, and hoping one day send her son to college is an inspiration for all of us to strive to better ourselves through hard work. At one point there was a fight in the street where a young man on his motorbike had a bloody face and other men were trying to force him off his bike. We did not stick around to know what happened, but there was a drunk man who did follow our group yelling at us in Swahili. Crazy moment!

Streets of Mainzini area of Arusha

As I walked through the streets of Mainzini it became apparent how different poverty looks from the pictures seen. Instead of shakes stacked on top of each other, the houses are spread out with small plots of land with crops growing. People are generally happy and kind to each other as they go about their daily business. The house might be made of whatever materials could be found, and the heat sources are wood gathered along the roads. Small shops everywhere sell everything possible, and someone always willing to help you find something. Chickens, cows, donkeys, goats and children run all over the place and everything needed to live is within walking distance of the front door. All mixed with pure determination, something most Americans do not see. All the people we visited did not want a free handout, and they are very thankful for the support they received from Convoy of Hope in helping the get out of poverty.

After a stop at the hotel for a quick refresh, we all headed downtown Arusha to eat street food at Khan’s BBQ. We all ate BBQ chicken, Nan bread and some beef kabob on a street corner in the middle of a bustling evening in the city. 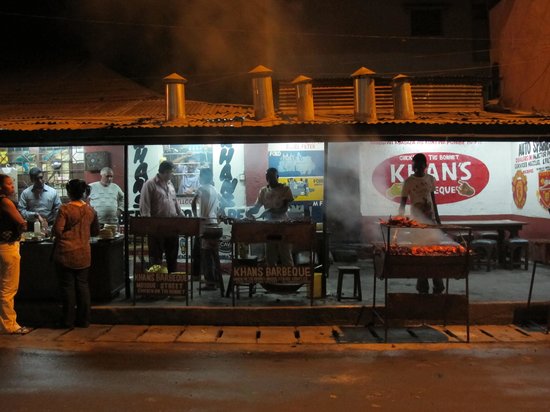 The chicken was not as spicy as I thought it would be, and the Nan bread was sooo yummy! I have not had any Nan bread as good in my life!

Sitting in the evening light in good conversation with the sound of Muslim call to prayer echoing through the streets. Something is not heard in the US very often and it has an eerie sound to it. Street dogs begging close by for scraps of food, and having rocks thrown at them to keep them away. Eating street food in Africa without getting sick was a relief. It seemed normal sitting in the street lights in the middle of Arusha and having a sense of magic in the air that only happens once in a lifetime.

Next Post: Love From The Maasai Children & Feeding Program