Since it was a long drive back to Arusha from Ngorngoro, our team checked in to the Karatu Hotel run by the Lutheran Church of Tanzania in the town of Karatu. I would not exactly call it a hotel, but more like a hostel. The rooms are clean, there is a shower and bathroom, but the room I was assigned would have things left over from the last person who occupied it. The beds all have mosquito nets which hint at the fact there was a rather large hole in the screen of the windows in which these nasty insects could come in. For the first time on the trip I had to use DEET spray for the bed sheets, and put on my insect lotion before bed. At this point all those anti malaria pills I have been taking all this time better be effective since I did get two mosquito bites during the night (as of this writing I DO NOT have malaria!). 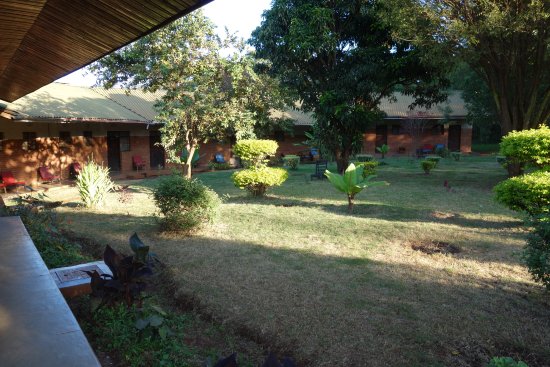 After checking into the room, I found myself along with the rest of the group eating dinner communal style with the other guests in the large dining hall. Being college students we have no problem with this concept, but the other guests may have not. Dinner consists of a potato chicken broth soup with rolls, some Tanzanian pilau, cucumber salad and some Tanzanian dessert I don’t recall the name of. With dinner done, I headed back to my room and crashed.

My room-mate got the scare of her life in the middle of the night when she walked into the bathroom to discover a moth flying into her face and a rather large spider hanging out on the wall near the toilet. Earlier on the same day I too had a rather large insect attach itself onto me. I have never seen a grasshopper as big as the one who flew into the jeep window while at Ngorogoro crater. And it was black too!

Morning was a real treat! I awoke to the sound of church bells clanging (it was Sunday after all) and the call to prayer from the local masque all blending together. The Lutheran church across the road treated us to a spectacular sounds of singing that when you listen to the recording of it, the sound is surreal. Breakfast was again communal style with the menu of toast, more Tanzanian pilau, omelet, and juice. After breakfast we all gathered our things, and headed for Arusha to do some shopping before leaving Tanzania.

Once in Arusha we were let loose on the Maasai market in town looking for whatever we wanted. I will say being American, bartering is not something we do much, and thus I am not very good at. The thing is it does turn me off when you have store owners trying to get you to buy something you do not want at all. It is considered to be rude in African culture to not buy something after viewing someone’s shop. I committed this offense and it was exhausting after all that shopping. I only got a few things for people, like a carved wooden giraffe, chonga for myself, African tea and coffee, and a shuka (Maasai wrap). One US dollar equals $2,000 Tanzanian shillings. So $10,000 shillings equals roughly $5.00 USD. So there was a lot of things we could buy with our American money, but mostly it was transactions in shillings since shop keepers would make a huge profit off you if dollars were exchanged. Also at one point all the street vendors gathered around one store waiting for us to come out so they could hawk their wears. A crazy adventure in itself trying to get back to the van.

I would say shopping in Tanzania was a learning experience, and I wish I could have bought more, but when you have to keep in mind the weight and size of the suitcase, it just could not all fit in there. I really wanted to bring back a floor standing wooden giraffe, but it was not going to happen. Maybe next time I come back.