Saying goodbye is hard. Saying goodbye to those who had an impact on you is even harder. As I made my way back to the airport to start the thirty six hour flight journey back to Seattle, I realized this maybe goodbye for sometime. As the van drove pass by the same exact places I first saw Tanzania, I knew I had come full circle. The sight of poverty no longer made me pity people, but motivated me to help them in one way or another as I return home.

The airport was packed with people boarding flights, and it took awhile to get my boarding passes for all my flights home. Going through immigration again was not as easy as the first time. I think the lady decided to put me thought all the international security checks out there. Full palm print, full hand print, full thumb print, full face scan, full fingers scan and asking about my naturalization status in the US (I’m a born US citizen). The whole time one of the professors could see the whole screen from where he was standing and could not understand why she kept going when the screen kept flashing “clear” for everything. Finally she let me go on to board my flight.

The flight from Tanzania to Ethiopia was uneventful and I was provided with dinner which was not as good as I remembered. Once at Addas Ababa Airport, we all had to go through security again before we were allowed in to the terminal area for our flight. All of us went through without much problems, and even flip flops had to be taken off. Once in the terminal to wait to board our flight (which was at 9 pm) I realized there was no way to get any water! So if you needed water (clean water) you had to filter it from the bathroom! Thank goodness for snack with some form of liquid in them. Once on the plane we all pretty much were packed in (nothing like United flight) but there was leg room! And entertainment that was free! Win!

Here is a little physics for your brain. Since the airport altitude causes issues with planes disembarking, the plane can only take off with half the fuel for flight. This means there has to be another stop for fuel some where. So where did the plane refueled? Dublin Ireland. I saw Ireland from the window of the plane, and it was early morning with rain. I have flown over Ireland before back in 2006 on my way to England. The view is similar to the country side of England when flying over (all that green fields and moisture).  At this point I have flown over Egypt, Kenya, Sudan, Italy, Netherlands, Germany, England, and Wales. As I said in previous post, all those countries yet to be explored. 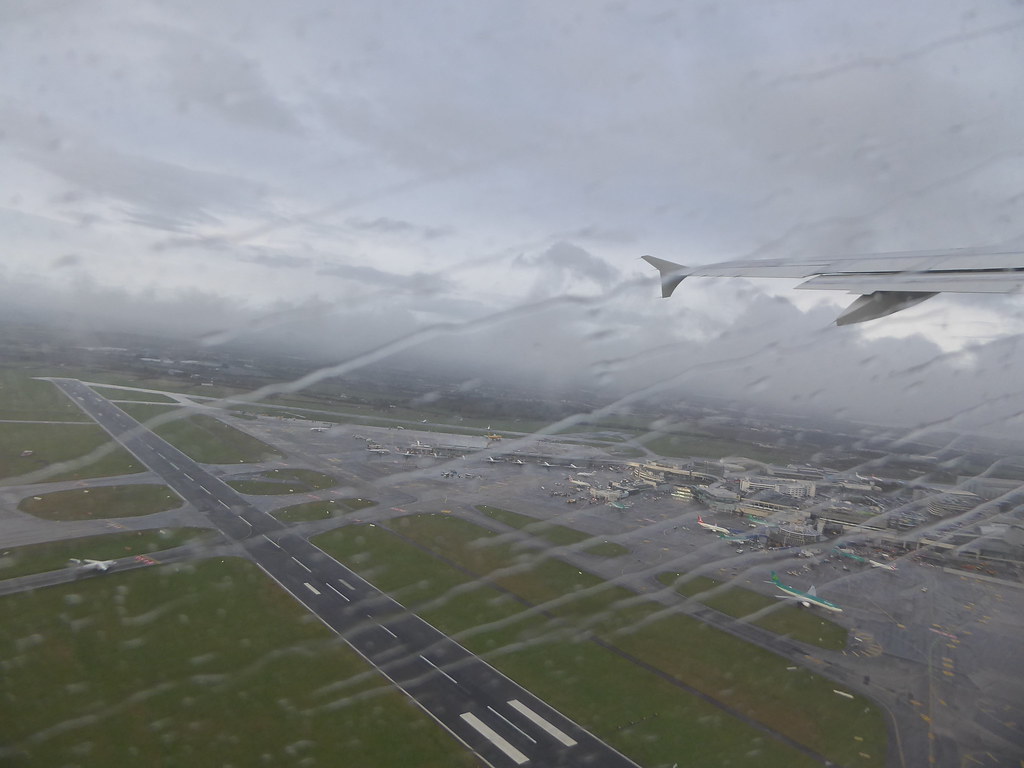 We touched down in Washington DC (Virginia) to yet another warm sunny day. Getting through Customs and Boarder Control was easy this time. The Washington DC airport has the new customs and boarder control kosaks which speedily moves all US citizens and Canadians through the lines faster. The boarder control personnel just stamps your entrance stamp in the passport and make sure anything you declare is valid, then off you go to get your luggage. Then off through second TSA security check, which went off without a hitch this time! And then off to wait in the terminal for the flight to San Fransisco.

The flight the San Fransisco was on United again and I got a window seat! The four hour flight from coast to coast was great. I saw from my window Virginia, Colorado, the Rocky Mountain range, and the Bay area before touching down at the airport. I only was in San Fransisco for forty-five minutes before boarding the flight to Seattle. I wish we could have had a little longer layover, but I can understand at this point we all just wanted to get home. The bay area was Cali sunny! To bad the Golden Gate Bridge was not seen from the airport or the plane ride. The flight to Seattle went off without incident, but I still dislike flying United Airlines! Still stuck in Y class (back of the plane where the toilets are), and no leg room what so ever. Two of the guys in our group had to trade people for aisle seats for their legs.

Once touche down in Seattle to a rainy cold welcome, we all made our way to the baggage claim where our families were waiting for us. My suitcase was one of the first ones off the plane (TSA checked it, so it was part of the last aboard) and off to the parking garage to drive home during rush hour traffic. My parents did get me Dick’s hamburger for dinner, and then I just crashed for a whole twelve hours to sleep and get rid of a cold that was forming while flying home. A week was not long enough in Tanzania, and leaving was hard. For the whole week I was disconnected and cut off from the outside world. My phone on airplane mode the whole time, and used as a camera only. A unintended digital detox. For once in a very long time I was focus only in the present moments, and in my surroundings. I really didn’t care what was happening clear across the world in US, and I didn’t care what was happening at home in Washington either. As one of my friends said it was like a paradigm shift had happened in that short week of being in the Tanzania. When I came back from Tanzania I no longer wanted to hear the political crap spewing from the news every time it news was on. Finding the strength to tell a professor they were interfering with God’s plan for me, and the needed step back when it came to my career path. That is why Tanzania!

For more information on Convoy of Hope or to donate please click the link.