Standing at the base of Mount Rainer at Sunrise is awe-inspiring and humbling. Seeing the mountain from afar looming on the horizon on a clear day does not give it any justice of the beauty of this symbol of Washington State. For two days sunset to sunrise, I had the awe-inspiring moments to see the mountain in all its glory.

Sunrise area at the northeast corner is the highest of the park’s roads accessible areas to the mountain and the best place to get an up-close look at the biggest glacier collection in U.S. Sunrise like it name was where I set out on viewing the majestic sunsets and sunrises from nearby lookouts.

The first things first, we had to stop by the White River campground to pitch our tents so we can fall into them into them without having to worry about it later that night. Getting two campsites together was a challenge, but we did find two (later that night we would come back to one of the sites having people already pitched a tent and asleep!). At roughly 2pm we headed for the trails to hike up to see the sunset while eating dinner.

We headed towards Fremont Lookout on Fremont Peak via the Frozen Lake trail. The trail starts out next to the Sunrise Rainier National Park Hotel. The trails at this point were busy with day hikers coming and going.

Many hikers we encountered on the way up did talk of seeing bears in the area. Most said the higher up you went towards the lookout, the more chance you would see a bear in the distance. Cougars I can handle, but when it comes to bears, it can be scary to encounter one on a trail. Mount Rainier only has black bears and not grizzly bears thank goodness, but it still was in the back of my mind when I hiked up with the group of us.

The trail up towards Frozen Lake is long, dusty and has little shade along the way as weaving through the mountainside. Bringing extra water is a must if the temperatures are above 70°F. Side cliffs opened to vistas of Mount Rainier looming before I covered in icy snow.

Frozen Lake is a lake with a snowpack that melts throughout the summer for drinking water in the Sunrise area of the park. It really is a small glacier that must be massive in the winter time. There was not a way of telling how cold this lake is because you cannot swim in it due to being blocked off from the public. 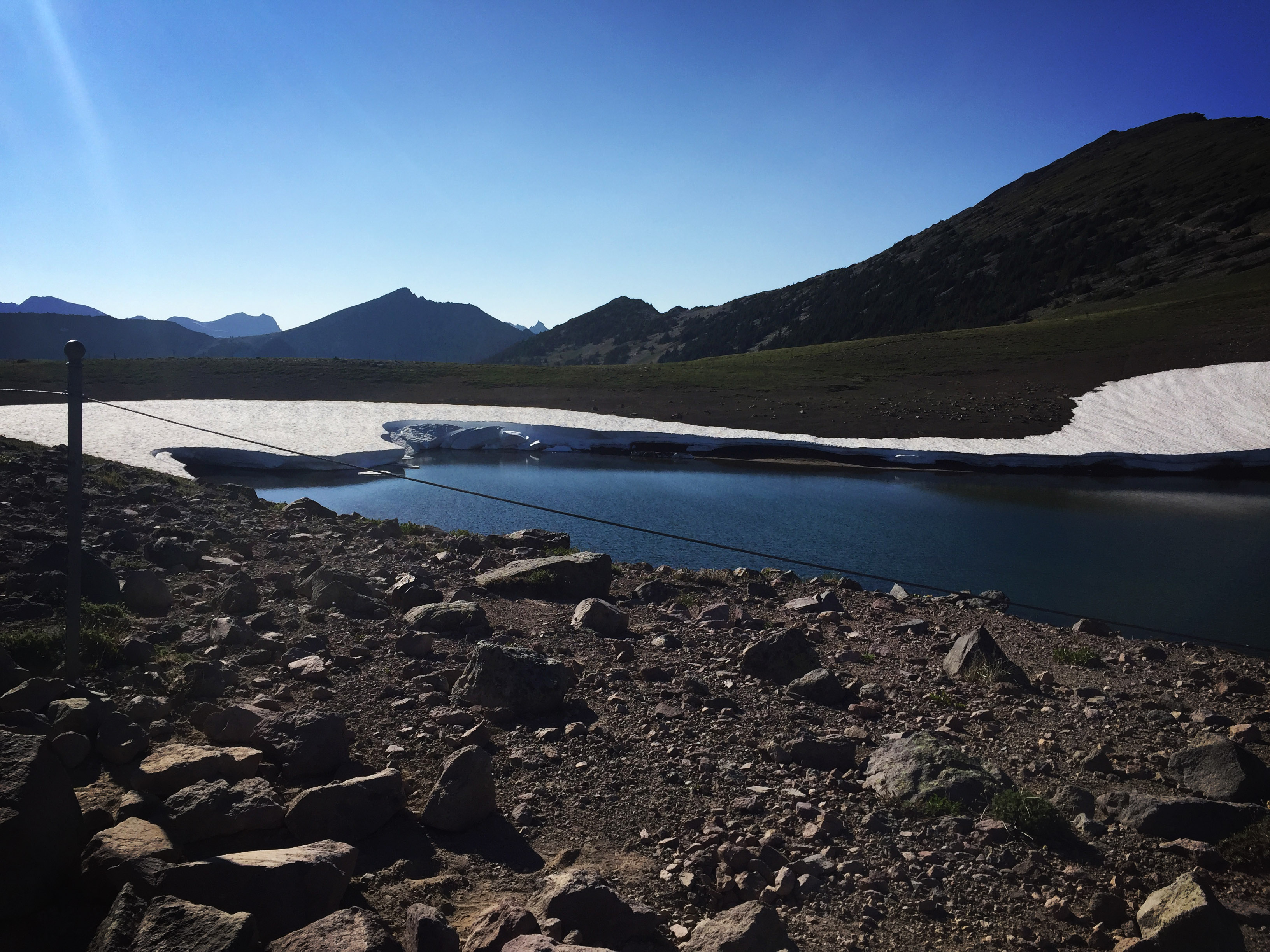 At the crossroad of trails Frozen Lake and Fremont Lookout, this Cascade Golden Mantle Squirrel was begging for the walnuts we had in our packs. At one point we could get close enough to touch it, and it took the nuts right out of our hands. I will admit to knowing full well there are no feeding animals in the park, and yes there was a sign on the other side of this rock stating this! Shame on me!

The trail up to Fremont Lookout was rocky slopes with small boulder and talus fields to navigate. Towards the top, the trail narrows with massive boulders below reminding all hikers to be careful navigating the loose rocks making up the trail. At one point while getting closer to the lookout, there was a sound like a gunshot/firework coming from the slopes of Mount Rainier opposite of me. This happened not only once, but a few times as an indicator of an avalanche and even in the middle of summer, it is still an issue hikers face. The avalanche was not viable to us on Fremont Peak. 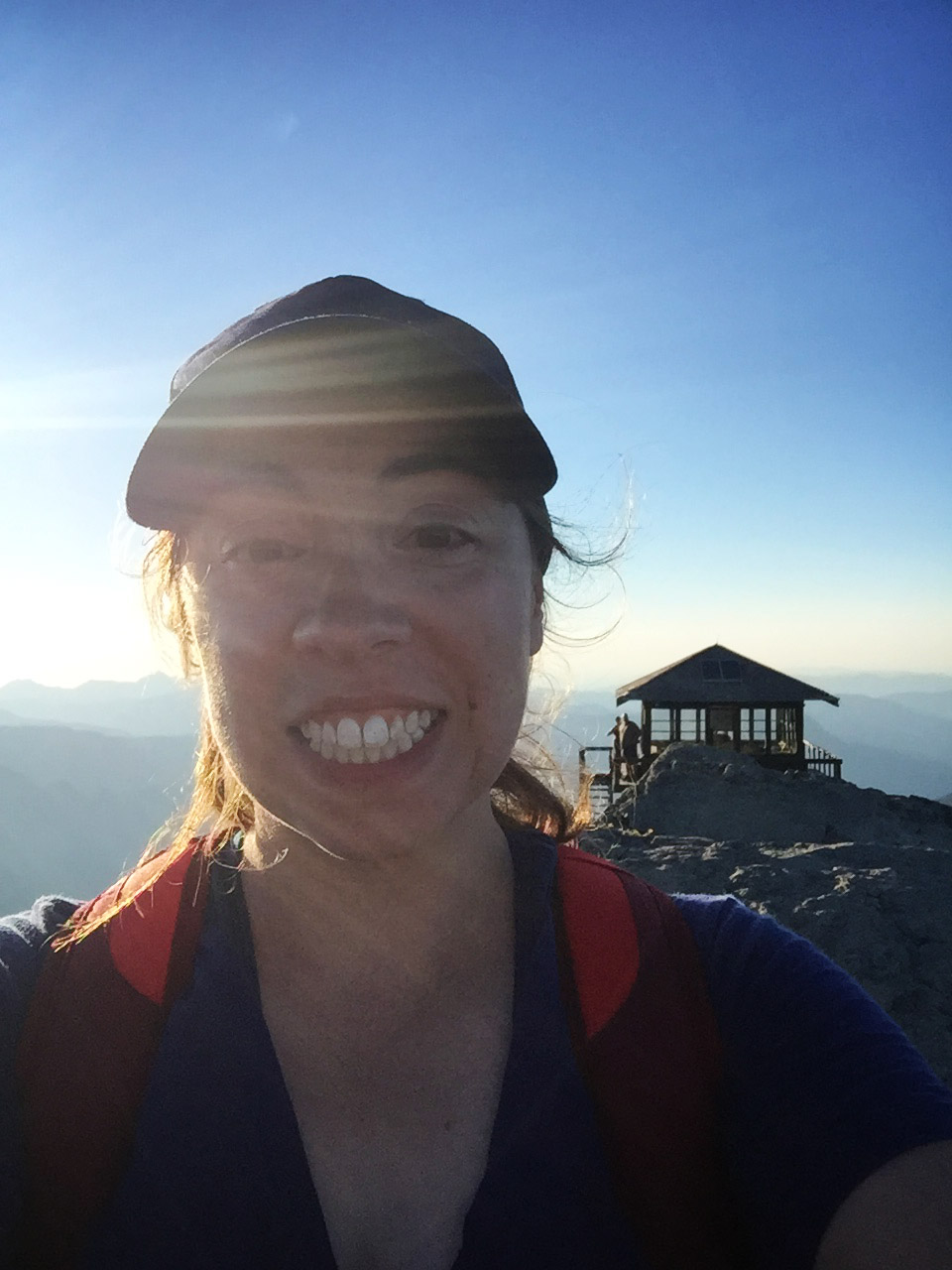 Once in sight of the lookout building, the temperature started dropping as the sun was sinking closer to the horizon. Even saw the mythical bird called a Ptargen that lives in the alpine.

After exploring the lookout (the lookout is locked, and cannot camp out in it anymore), we all settled into the rock outcrops to enjoy our dinner in a sealed pouch. While eating our meals, we watched the sunset in quietness enjoying natures most beautiful sight.

Sunsets are a life-changing moment for many who witness them. Experiencing them atop a mountain is a once in a lifetime moment.  Watching the sun sinking into the horizon reminds me to take a step back and just experience life as it is in the moment. The pinks, purples and golden rays refracting off the slopes of Mount Rainier is and always a beautiful sight to behold.

After spending another hour atop, we headed down the trail in dying light toward camp. By halfway down the darkness started to change the landscape into something of a mystery.  I have only ever hiked in darkness once. Being told by forest rangers this is bear and cougar country, it does make one very hyper-aware of your surroundings. I will say it was nerve-wracking to be the one in front of the group leading them down the trail! I did get down the trail unscathed as a group of people started heading up the trail (it must be a thing to hike at night). I arrived with the group back at the campsite and passed out after 5.2 miles!

Getting up to chase the sunrise can be a pain in the butt at 5am after only four hours of sleep the night before. Having no coffee and only a granola bar to get me to the lake just makes it harder. But seeing the sunrise was worth it! As I trudged onward towards my final destination, the rays from the sun started moving up the mountain in golden rays reflecting off illuminating all around the lake. At Shadow Lake, the place was remote enough to allow peace to resonate as nature started waking up for another day. 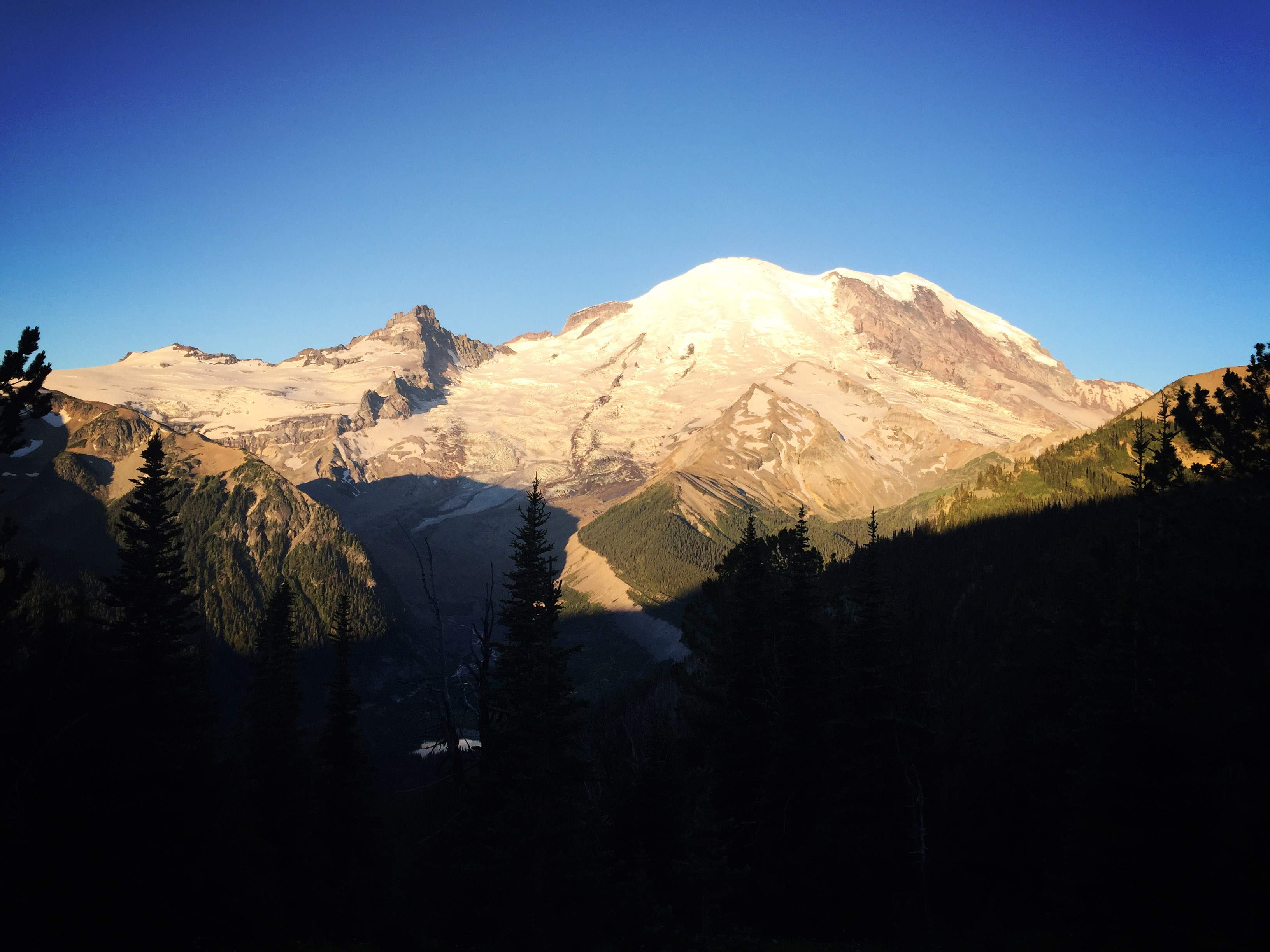 Here coffee finally was pumping through my veins waking me up for another day of hiking. The only sound I could not stand was the deer flies and the mosquitoes trying to add to the collection of bites from the previous day.

After spending relative peace and quiet taking in the beautiful sunrise, it was time to head towards the next trail-First Burroughs Mountain Trail. As I climbed up to the junction for the trail, I passed an old 1930s campground. The outlines of the camping spots can still be seen to this day.

The  Frozen Lake Junction is where a few other alpine trails split off. One such trail is First and Second Burroughs Mountain trail. The trail is 4.7 miles of steep switchbacks along some rocky talus fields were marmots, ptarmigans, pika and the famous mountain goats made appearances. One such marmot ran down the steep slope and jumped right in front my face as he made is way past me!

Once to the top of First Burroughs Mountain, I was up close and personal with a mountain that is a sleeping volcano. My second one in a span of four weeks!

Spending an hour looking at Mt. Rainier, and checking out all the peaks of interest, the group and I made our way down the trail towards the parking lot. Five Guys Burgers and a Starbucks were in order after two days of hiking in the alpine of Mount Rainier. 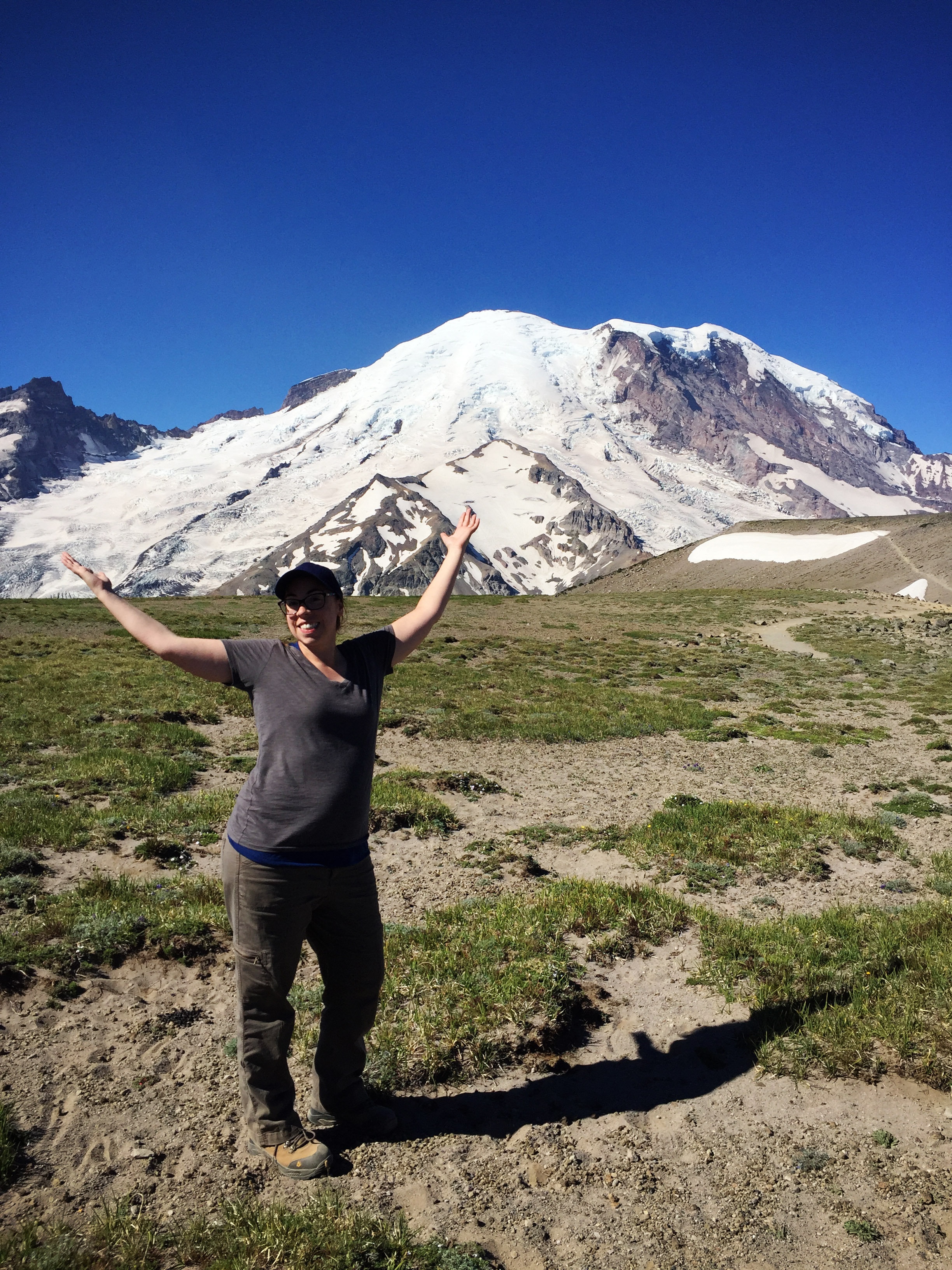 What are some favorite memories at national parks? Is Rainier on your list of places to visit? Let me know in the comments!